“This is the good news. Hearts and minds are changing. An increasing number of millennials, business leaders and women in particular are calling for a new kind of market: a sustainable market, an inclusive, equitable, green and profitable market where sustainable principles drive growth, generating long-term value through the integration and balance of natural, social, human and financial capital.”

We need an economic model that works for people and the planet
https://www.weforum.org/agenda/2019/09/how-to-make-markets-more-sustainable/
via Instapaper
“But capitalism as it has been practiced in recent decades — with its obsession on maximizing profits for shareholders — has also led to horrifying inequality. Globally, the 26 richest people in the world now have as much wealth as the poorest 3.8 billion people, and the relentless spewing of carbon emissions is pushing the planet toward catastrophic climate change. In the United States, income inequality has reached its highest level in at least 50 years, with the top 0.1 percent — people like me — owning roughly 20 percent of the wealth while many Americans cannot afford to pay for a $400 emergency. It’s no wonder that support for capitalism has dropped, especially among young people.” 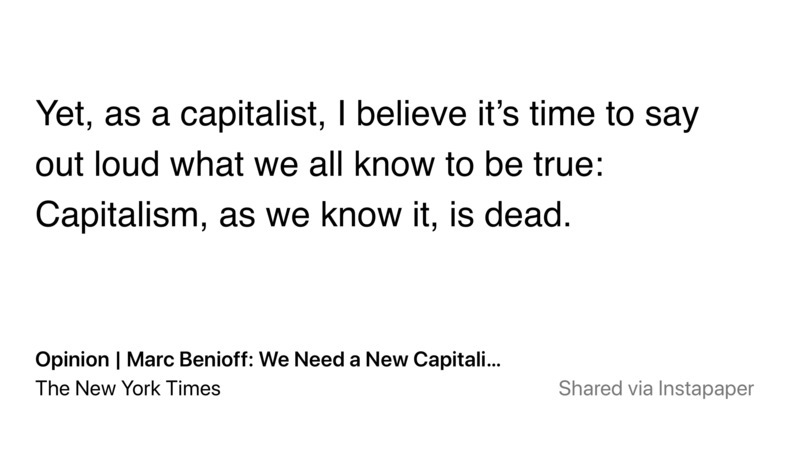 “And so a machine should be intelligent if its actions achieve its goals. And then of course we have to supply the goals in the form of reward functions or cost functions or logical goals statements. And that works up to a point. It works when machines are stupid. And if you provide the wrong objective, then you can reset them and fix the objective and hope that this time what the machine does is actually beneficial to you. But if machines are more intelligent than humans, then giving them the wrong objective would basically be setting up a kind of a chess match between humanity and a machine that has an objective that’s across purposes with our own. And we wouldn’t win that chess match.” 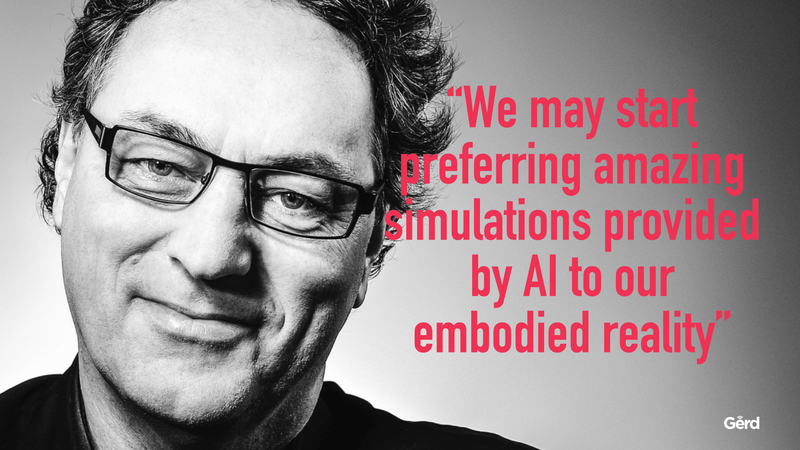 “Since going public, Uber’s valuation has fallen nearly 50 percent. The company is on pace to lose more than $8 billion this year, due to onetime payouts to Uber employees and mounting quarterly losses. And that was before California codified a court ruling that could force the company to reclassify its workforce as full-time employees, something with the potential to transform its domestic business.”

“There is a growing pattern of tech luminaries posing as open to concerns and then swiftly dismissing them. Yuval Noah Harari, the influential author Sapiens and Homo Deus and a historian concerned about technology’s capacity to harm humanity’s future, has captured the attention of many Silicon Valley grandees. Yet, in his recent discussion with Mark Zuckerberg, when Harari openly worried that authoritarian forms of government become more likely as data collection gets concentrated in the hands of a few, Zuckerberg replied that he is “more optimistic about democracy.” Throughout the conversation, Zucker­berg seemed unable or unwilling to take Harari’s questions about Facebook’s negative impact on the world seriously. Similarly, Twitter cofounder Jack Dorsey is very public about his love of Eastern philosophy and meditation practices as ways of leading a more reflective, focused life, but is quick to brush aside the idea that Twitter has design features that hijack people’s attention and get them to spend time aimlessly cruising the platform. The gap between preaching and practicing in Silicon Valley isn’t promising.” 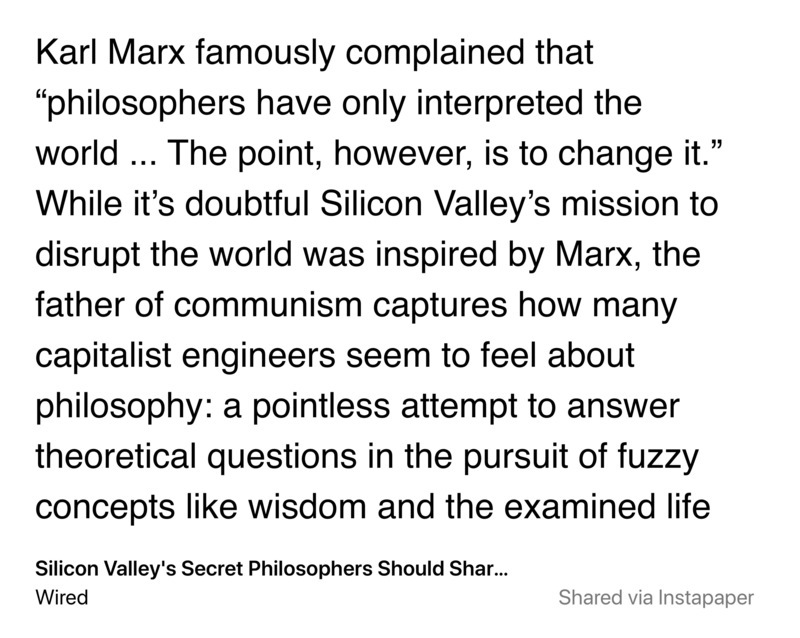 “Saturday at the Atlantic, Franklin Foer proposed that meaningful action to combat warming may require that the bedrock principle of national sovereignty be retired, such that leaders like Bolsonaro (or, for that matter, Trump) won’t be able to operate with impunity on climate issues which, despite playing out within those nations’ borders, impact the rest of the world as well (often more so, since impacts are distributed unequally). “If there were a functioning global community, it would be wrestling with how to more aggressively save the Amazon, and acknowledging that the battle against climate change demands not only new international cooperation but, perhaps, the weakening of traditional concepts of the nation-state,” he wrote. “The case for territorial incursion in the Amazon is far stronger than the justifications for most war.””

The Glimmer of a Climate New World Order
http://nymag.com/intelligencer/2019/08/climate-at-the-g-7-glimmers-of-a-new-world-order.html
via Instapaper
“Facebook achieved this dominance by combining social media, mobile, cloud and big data technology. Its phenomenal rise to power happened on the back of emerging technologies, not individually but together. Cloud-enabled big data and mobile helped deliver influence through social media, all made possible by the internet and the world wide web. It’s a classic example of explosive growth on the back of tech-driven innovation that taps into an unmet customer need.

‘What 2.7bn people see and interpret as truth daily will be “governed” by a single for-profit company’
– BRIAN HOPKINS

Facebook already has a bigger daily impact on the lives of some people than their government. In some respects, it has just as much influence.

Now, what 2.7bn people see and interpret as truth daily – and the approximately $40bn that firms spend in advertising each year – will be ‘governed’ by a single for-profit company. Compounding this concern, consider that Facebook, through preferred stock, is entirely controlled by one person.”

Facebook and the grand challenge of digital ethics
https://www.siliconrepublic.com/companies/facebook-media-currency-digital-ethics
via Instapaper 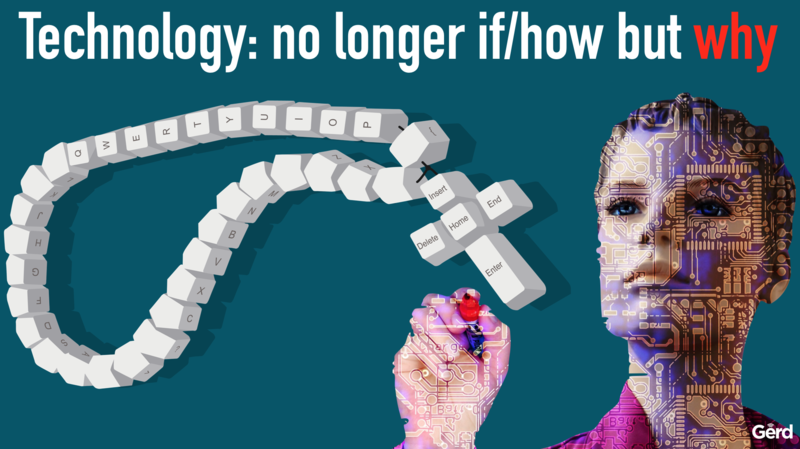 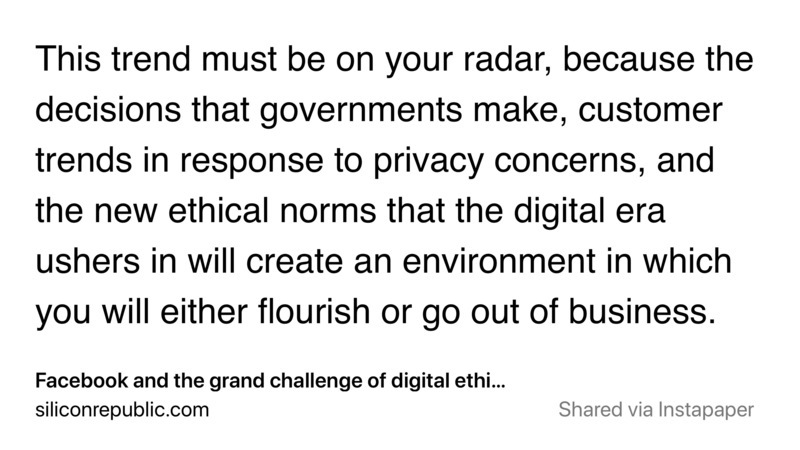 “Musk argued that such devices will help humans deal with the so-called AI apocalypse, a scenario in which artificial intelligence outpaces human intelligence and takes control of the planet away from the human species. “Even in a benign AI scenario, we will be left behind,” Musk warned. “But with a brain-machine interface, we can actually go along for the ride. And we can have the option of merging with AI. This is extremely important.”

However, some members of the science community warn that such a device could actually lead to human beings’ self-destruction before the “AI apocalypse” even comes along.

In an op-ed for The Financial Times on Tuesday, cognitive psychologist and philosopher Susan Schneider said merging human brains with AI would be “suicide for the human mind.”

“The philosophical obstacles are as pressing as the technological ones,” wrote Schneider, who chairs the Library of Congress and directs the AI, Mind and Society Group at the University of Connecticut.

To illustrate this point, she brought up a hypothetical scenario inspired by Australian science fiction writer Greg Egan: Imagine as soon as you are born, an AI device called the “jewel” is inserted in your brain which constantly monitors your brain’s activity in order to learn how to mimic your thoughts and behaviors. By the time you are an adult, the device has perfectly “backed up” your brain and can think and behave just like you. Then, you have your original brain surgically removed and let the “jewel” be your “new brain.””

Elon Musk’s ‘Brain Chip’ Could Be Suicide of the Mind, Says Scientist
https://observer.com/2019/08/elon-musk-neuralink-ai-brain-chip-danger-psychologist/
via Instapaper